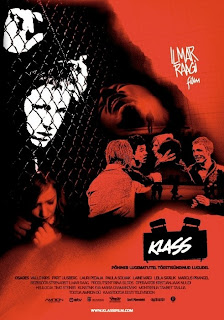 How a social comment can be entertaining
Review by Sten Leesmann

It is definitely hard to imagine how a morbid film like “The Class” can, with all its issues regarding bullying and violence, still be considered as entertainment, but the fact remains that Ilmar Raag’s composition is a prime example of a perfect mixture of art and entertainment. Skillfully directed, shot and edited, it’s a masterpiece that Estonian cinema can definitely hold high as one of the magnum opus of our short censorship-free history. That being said, the much-acclaimed drama still has weak flanks that even Atlas himself couldn’t uphold.

Without revealing much of the well built-up suspension through retelling the movie, one must commend the way the story of Kaspar and Joosep is portrayed. Kaspar, the protagonist, is a simple country boy with principles who moved to the city. The main conflict unravels when one day he decides to make a stand against the leader of the pack in the class, the antagonist, Anders, in order to prevent the whole group’s everyday bullying of Joosep. The story takes place in a rather short period. We are given 7 days to understand the characters and get on the same wave-length with the director. 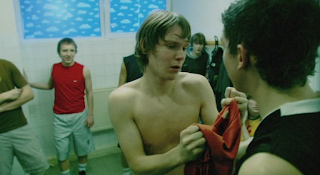 The one flaw this movie suffers from must be the overusing of profanity. While it is a refreshing touch in Estonian film, considering the borders that surrounded the creativity for the large part on the 20th century, it still diminishes an otherwise outstanding film. The dialogue wasn’t believable at times and made one think that Ilmar Raag just hung out at the local youth center during the pre-production and picked up 90% of the cursing from there. It is still possible to put this indiscretion at a distance and look at the other great aspects this film achieved, but it can’t be left unsaid that the dialogue could have been emphasized more. This defect surely inhibited character development at times.

Putting the dialogue aside, the young cast must be commended. Vallo Kirs and Pärt Uusberg especially deserve full praise for their respective portrayals of Kaspar and Joosep. One can really feel for both of them as their problems mount with each day. Meanwhile, Lauri Pedaja also gives a notable performance as a mean pecker who the viewer loves to hate from the first moment they lay their eyes on him. We never really get to know the reasons why the conflict exists to begin with and it probably isn’t important. Maybe the non-explanatory stance that Raag uses is meant to tell the viewer that some things just have been and will be the same, unless some definitive action is taken. 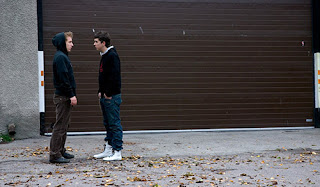 The most depressing issue is that schools where these kinds of affairs occur actually exist in Estonia and “The Class” is nothing more than a brutally honest depiction of these events. As shown in the film, it is not uncommon that there is one leader after whom the whole class runs amuck. It may seem totally over-illustrated and ridiculous at times, but the problem is very much there and the overly passionate expression that Raag uses functions as acknowledgment of the topic as opposed to categorization of unbelievable fiction.

The technical department was also at its best in this movie. The editing and cinematography deserve special mention due to its diversity. It keeps its fast pace throughout the movie and taking the short time period in which the story takes place into consideration, Raag definitely made the right choice. The viewer can feel that he is in the hurricane himself, when the continuous clashes between Kaspar and Anders take place. Meanwhile we get longer shots and some powerful mis-en-scene’s that vigorously bring out the best and worst in the main characters. Through interesting camera angles and enjoyable score “The Class” toys with the artistic and entertainment value without fully committing itself to one or the other.

The producers can also be credited for killing a cash cow because in 2010, “The Class” was followed by a mini-series, “The Class: Life after”. Without revealing the somewhat twist ending, it could be said that the following series wasn’t really necessary, but it still works as a conclusion. Personally I liked the ending of the film and felt that the project could have been left untouched but this choice is really for everyone to make themselves. Whichever one is preferred, nothing can take away the importance of “The Class” in contemporary Estonian cinema: a bold and honest depiction of a very real problem while offering a refreshing touch in the technical section as well. Altogether an enjoyable watch.
Posted by Estonian Films Students at 2:21 AM

Estonian Films Students
This blog has been created by the Bachelors students of the Tallinn University Baltic Film and Media School (BFM) during a workshop dedicated to film criticism. We thought that Estonian films deserved to meet a wider audience and will try to do our best to present you some of the films that shaped our history.